In this new article, written with fellow geographer Stefano De Sabbata, we explore the relationship between spatial user-generated content from Twitter, Foursquare, OpenStreetMap, and Wikipedia and socio-economic variables in Los Angeles County [read the full paper in PDF]. All the data and resources are freely available on GitHub.

Abstract: Online representations of places are becoming pivotal in informing our understanding of urban life. Content production on online platforms is grounded in the geography of their users and their digital infrastructure. These constraints shape place representation, that is the amount, quality, and type of digital information available in a geographic area. In this article, we study the place representation of user-generated content (UGC) in Los Angeles County, relating the spatial distribution of the data to its geo-demographic context. Adopting a comparative and multiplatform approach, this quantitative analysis investigates the spatial relationship between four diverse UGC datasets and their context at the census tract level (about 685,000 geo-located tweets, 9,700 Wikipedia pages, 4M OSM objects, and 180,000 Foursquare venues). The context includes the ethnicity, age, income, education, and deprivation of residents, as well as public infrastructure. An exploratory spatial analysis and regression-based models indicate that the four UGC platforms possess distinct geographies of place representation. To a moderate extent, the presence of Twitter, OpenStreetMap, and Foursquare data is influenced by population density, ethnicity, education, and income. However, each platform responds to different socio-economic factors and clusters emerge in disparate hotspots. Unexpectedly, Twitter data tends to be located in more dense, deprived areas, and the geography of Wikipedia appears peculiar and harder to explain. These trends are compared with previous findings for the area of Greater London.

These are our findings: 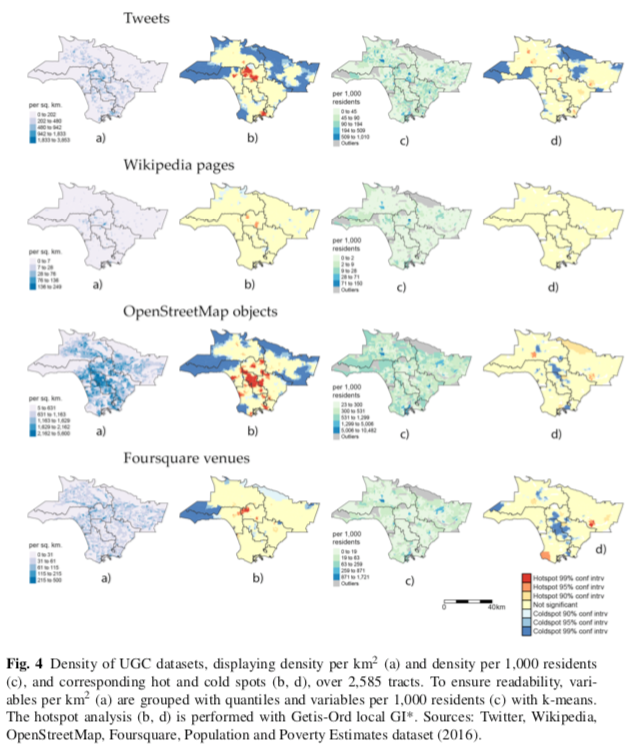 Reference: Ballatore, A. and De Sabbata, S. (2019) Los Angeles as a digital place: The geographies of user-generated content, Transactions in GIS, in press  [pdf]